Veggies, fish, and fire Oh My!

Today's documentary film, Dying to Have Known by Steve Kroschel; Mr. Kroshel sets out to determine the legitimacy of the Gerson Method for cancer treatment. As a film it is really terrible (and as research it is highly unscientific) in that it is melodramatic and clearly manipulative and biased; there is no intelligence expected of the audience to be able to decide for itself. That lack of credit for the audience is enough to discredit it’s own message because it lacks confidence in its own posits. On the other hand, I already believe that “Big Pharma” controls the world of health and medicine and that the “conspiracy” theories are closer to truth than not.

If I were to come down with cancer I would want to try alternative therapies before chemotherapy; my concern is the cost and affordability. I also think about how very  brave it is for a person to chose alternative therapies, such as the Gerson Therapy or that of Burzynski, in the face of death, and the ever pressing winding down of the clock of life; you only have enough time to try it once, unless you make the right choice. What kind of place is that to be? I better start juicing now so I can never find out! 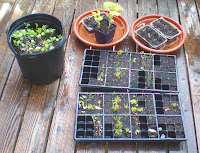 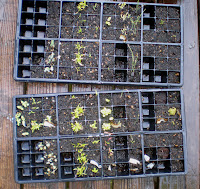 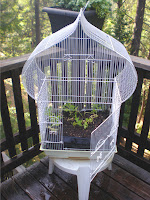 I’ve already started growing my own vegetables. I felt the most important aspect would be to chose non-GMO (genetically modified organism) seeds. I felt that the soil didn’t have to be organic, just pesticide free. I’ve decided my thinking is faulty and if I’m going to the trouble at all, I should use organic soil as well. My seedlings have been a great success. Of all those I transplanted, only one died. I am looking forward to the peas and tomatoes climbing all over this bird cage; it will be beautiful. There’s spinach in the center and I left the door free to reach inside. The cucumbers in the 5 gallon bucket have secondary, true leaves now. My herbs are really small. I didn’t plant all my seeds, and these are really too early. You can see I have blossoms on the squash and that isn’t supposed to happen for another month. Next week I’ll transplant into permanent pots and start more seeds. It seems to me I don’t have enough! 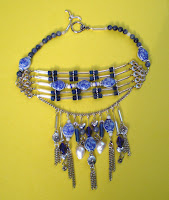 I also created a new necklace this week; it’s a choker. Silver findings, silver lined glass, lapis, sodalite and white jasper rounds, and porcelain beads with Chinese symbols I got from Lea Avroch. The chain with the dangles lies perfectly at the throat and the choker is not too heavy and very comfortable and stable on the neck.


I was active on Pinterest this week as well. Some of my favorites are from Lisa Liddy and Jennifer Geldard.

Along the path of new discoveries I found a “Fish Watch”list from the Monterey Bay Aquarium. I saw something once from which I remembered, choose sea food from the northernmost part of the Pacific, and never eat Talapia. Now I know I could eat Talapia if it is farmed in the USA, but I’d still rather have Salmon. It saddens me that I may never eat salmon again because “they” are going to genetically modify salmon; if that happens, I’ll consider it extinct. I think my dad would have been equally saddened; after retiring from the Army he fished salmon for a living. Along the line of fish food and Talapia, I found this awesome story about the urban farming movement. My final discovery was this cute pair of earrings modeled after Chinese knotting. These are a great inspiration.

Isaac went to the fair this weekend.  Our area is famous for Mark Twain’s Famous Jumping Frog of Calaveras County; yes, there is really a frog jumping contest. He had a wooden plaque entered which received a blue ribbon, was totally on his own for the first time (made me nervous, but all went well), took lots of pictures and had an awesome time!

As fire season, and the deadline for defensible space approaches, I have one more burn to take care of the two-year-old pile of pine needles, and one more week to rake and burn what fell this winter. On top of that duty I’ll be continuing my exercise regime on the Wii Fit (I started last week!). See you soon!
Posted by MonaRae at 10:16 AM