Yesterday I received a deluge of requests to pay attention to the campaign "Kony 2012".

At first I ignored it; there are so many problems locally that need attention, whatever Kony 2012 is, it is too much on top of what I already worry about. After that I saw a post "from the other side of the issue" that invited me to read BEFORE I watched the movie. I already had the movie "Invisible Children Kony 2012" cued to watch, so I decided to follow the instructions and read the "pre-show". I felt that the article posted on Siena-Anstis.com was well written, empathetic to the film, and brought up good points. This morning I watched the Invisible Children film, and it changed my opinion of the article, and really made me think both about the issue, and about the intentions of the Siena-Anstis article.

I felt strongly enough that I should blog about the statements made by both sides and went back to my Facebook sharing of the Siena-Anstis opinion article that I call the "pre-show". Funny thing, I could not connect to the article, and only received a database error. What I remembered most was how it stated that a particular scene indicated that the maker of Kony2012 was not equipped to let the protagonist Ugandan-friend-good-guy cry about the loss of his brother, and therefore was not equipped to truly understand what help they need. I felt the point was sincere, and agreed that it is important to allow a person's grief to be expressed despite an observer/helper's discomfort. Feeling the article important enough for this discussion I traveled through Google channels to get to the  Siena-Anstis article, which now appears completely different, and doesn't seem to mention the "tears". I suppose there could have been two or more articles written by them yesterday, but I'm glad I found this one! My posting is about intentions, and it is clearly a case of the pot (Siena-Anstis) calling the kettle (Kony 2012) black.

Siena Anstis, "On Invisible Children's Kony 2012": "commodifies white man’s burden on the African continent" "Commodifies" defined by Miriam Webster is to "turn into a commodity", something one would purchase. The first line was easily read without thought before seeing the movie; it supported my desire to ignore the issue. Was that the intention of Siena Anstis? Or was their intention to make me believe the campaign was arrogant and profit mongering? After having watched Kony2012, the only profit mongering I could see was the option to give a few dollars a month to Tri (charitable funding for Invisible Children), but it was a choice, it was not begged for, nothing left me feeling guilty for not being able to afford even a few dollars a month. I have a brain of my own, it works pretty well, and I will investigate how the money they collect is being sent.

While writing this post, I felt a need to add links to it, and when I went to capture the link for the Invisible Children movie, I noticed at the bottom of the screen a Facebook "like". When I pressed the like I got an error message! Here's a screen capture; notice that Facebook has banned the link. 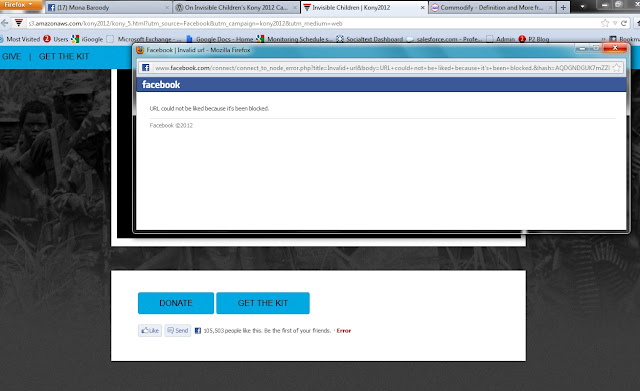 So, I decided I would find the direct link and go to the Invisible Children website through Google Search. The first link was a CBS report about the film going viral. I guess I better read that too!

Also along the lines of searching for links to add to this post, the donations repository Tri was mentioned, so I thought it should be linkable. Tri.com, per se, is not a website, so I clicked on the "donate" button from the Invisible Children website, and was directed to a donation page  whose url is "StayClassy"! Hmmmm.....