Here in the Mother Lode (Murphys, California to be precise) we have a great little bead shop, Murphy's Bead Gallery. It is a "Gallery" in every sense when you walk in and see the amazing beaded pieces made by the owner Sue Horine.

I go into Sue's shop once a week; she's next door to the Murphy's Music Co. where my son takes guitar lessons. I love to chat with Sue about her art and techniques, as I paw through the beads in baskets and hanging on the walls. I swear I see something new every time. But there's almost always something I fondle every time I go in, and finally give in and buy it. 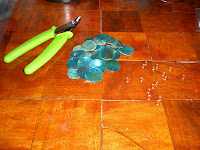 This week I had to have these turquoise shell coins!

As I created the jump rings I knew I'd need for each of the coins a vision of a mermaid tail came to mind.

I love working with wire, and the idea of a diamond shape covered in scales felt just right to show case the shimmeriness and pearliness of these beads. 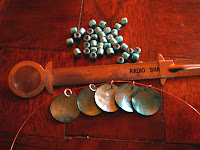 I had to decide how big I wanted the pendant to be, and I had a limited number of beads, and then I would need to calculate how big to make the wire frame. I started by thcounting the number of coins I had and what number would make the widest row of the diamond. Then I threaded some coins on a wire, spaced the way I wanted them to hang, and measured that width. The problem was that they wouldn't stay lined up so I decided I needed beads between the coins; I found the perfect shade of metallic turquoise tubes to use as spacers. 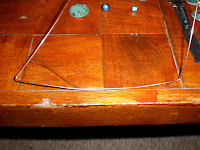 I used the grid on my table as a measuring device and cut a length of wire long enough for the diamond shape as well as the bale and wrap. I created the bail by bringing both ends of the frame wire around a mandrel and wrapping them together at the neck using a finer gauge wire that would become the lattice support for the beads on the pendant. 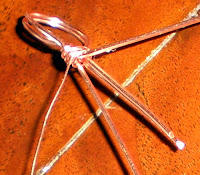 After securing the bail I strengthened the wire, shaped in the diamond. I used a hard rubber mallet and that flat, iron, gadget which is actually a concrete curb shaper from the hardware store. I use my knees as a vice around the shaper's wooden handle (on the back side) and the flat side forms a table like surface. 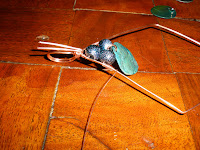 I moved the bale ends up, and planned to create spirals with them. Now the fun begins. I decided to fill the top of the diamond with these great metallic and textured dark blue rounds. I began coiling one side of the diamond base just far enough to fit the bead in the crook; after coming out the other side of the bead I wrapped again around the frame to the point where the second row of dark blue beads would fit, adding a coin between them. 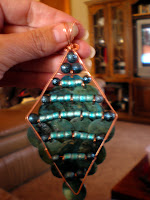 Then I resumed wrapping wire around the base until the next row would cross under the coin on the first row about 3/4ths of the way down (enough to show as much of the next row while keeping the first row from falling behind it). I continued in this manner, adding a dark blue bead to the beginning and end of each row, and using three lighter blue, smaller tube beads as spacers between the coins.

To finish the pendant I made a spiral from the bail ends and spread the loops at the top to form a "v". Here are back and front views. 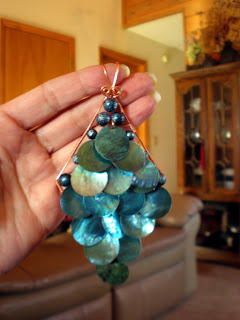 I hope you have enjoyed watching me work, and that it inspires you with some design ideas of your own! Here's an image you can pin to your own pinterest boards. Unitl next Tutes and Tubes Tuesday!